Why Ag in the Classroom?

Agriculture means survival. Over time, fewer and fewer people have close contact with farming and the total agricultural sector. They’re not aware of their own and society’s total dependence on agriculture. People must be agriculturally literate in order to make responsible decisions affecting this giant lifeline.

Teaching students to be agriculturally literate brings their learning to life. Helping students understand the farm-to-table connection is important in our consumer-driven society. That’s what the student Minnesota AgMag Series is all about.

Some words in your AgMag may be unfamiliar to your students. These words often appear in bold type or in italics. Many are defined in the articles, and they’re also included in modified form in the student pages at MNAgMag.org. Words you may wish to pre-teach are:

AGRICULTURE SYSTEM: The steps required to get an agricultural product from the farm to the consumer. There are six steps that are usually involved: Producing, processing, distributing, marketing, consuming, and disposing.

CELLULOSE: Found in plant cell walls. It is the main building material in plants. Depending on the plant, it can be very tough.

CONSUMERS: Someone who buys and uses goods. The process of buying and using those goods is called “consuming.”

DISTRIBUTING: Getting the processed products to places like grocery stores and farm markets.

FERMENTATION: The breakdown of a substance by bacteria, yeast, or other microorganisms.

FIBROUS MATERIALS: Things, including plants, that contain a great deal of fiber. This can make them difficult to digest.

HOMOGENIZED: The process that breaks fat in milk into smaller droplets so they stay in the milk, rather than floating to the top.

HYBRID: A product that is created by combining two (or more) different elements.

INTERDEPENDENT: Two or more people or things that are dependent on each other.

MARKETING: Advertising agricultural products in places like TV and radio ads, magazines and newspapers, and the internet to help people know about them.

MICROBES: A microorganism that can cause fermentation.

PASTEURIZED: A process of heating milk to a certain temperature for a set period of time in order to kill harmful bacteria.

PROCESSING: Changing the raw materials into things we eat, wear, and use.

PRODUCERS: Someone who grows or develops goods to provide or sell to others. The process of growing or developing is called “producing.”

RAW MATERIALS: A basic material that has not yet been processed into something else.

NATURAL AND RENEWABLE RESOURCES: Resources that can be replaced or grown again if they are used.

Sun, air, water, and soil are the resources from which all agricultural products develop. 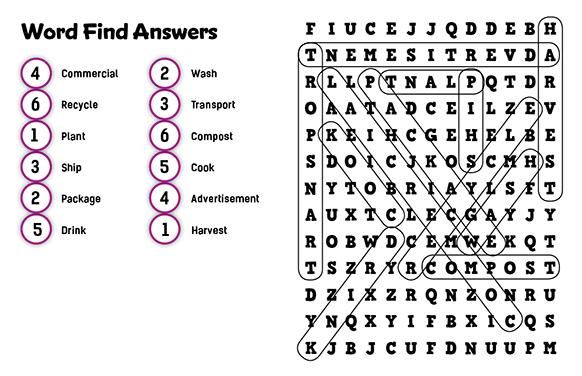 Dairy Products: From the Cow to You

Right now there are 88 farms with a total of 234 robots in Minnesota. One robot can milk 60 cows every 24 hours. They can help by allowing farmers to spend less time overseeing the milking and more time on their farm business. Robots are expensive, but they have significant advantages for farmers. They allow for more specialized care of cows; how much milk a cow produces determines how much feed is given, how many times a day the cow will be milked (at least twice, but up to seven times a day), can give an early warning if the cow is ill, and gives the cow a consistent daily routine. Cows are creatures of habit—they like each day to be like the day before, and the less stress on the cow, the more productive it will be. Some of the most advanced robots can take over 100 measures (weight, temperature, and pounds of milk produced, for example) each time a cow is milked. This makes the farm much more efficient and don’t require as much direct attention from the farmer as more traditional milking machines. That allows the farmer to put more time into other parts of the farm’s business—and spend more time with the family.

Use an atlas to be sure students drew the correct connections.

This article notes that hybrid seeds, livestock vaccines, and commercial fertilizers were big developments in this time period. Explain what these are before beginning the discussion below.

Use a United States map to check the students’ placement of corn and soybean states.

What can you tell us about where corn and soybeans are grown? They are often grown in the same states. (This region is commonly called “the corn belt” because it includes most of the top producers of corn. And with corn comes soybeans. The region has favorable climate and terrain, rainfall, and fertile soils for producing both of these commodities. Abundant corn and soybeans make the region a leading producer of livestock, too.)

The workbook lists both the top soybean and top corn states in the U.S. from 2015, but several states made the top 10 list for both. Only Arkansas, Kansas, North Dakota, and Wisconsin did not make both lists. That means that Illinois, Indiana, Iowa, Minnesota, Missouri, Nebraska, Ohio, and South Dakota are all tops in soybeans and corn.

The population growth will be much faster in less developed countries.

Why Are They Hungry?

The two main causes of hunger in the United States